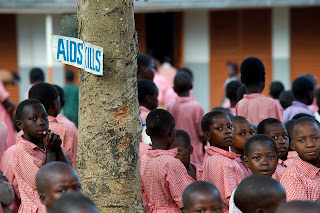 A placard on the ground of the Kyamulinga School

Thursday, December 1 was World AIDS Day.  AIDS was first diagnosed in Uganda in 1982 and it spread quickly from Lake Victoria, through urban centers, and along highways to rural areas.  In cities, the infection rate reached 29% before a strong government response and the deaths of many original sufferers began to lower it.  Today the rate in Uganda is about 5.4%, but growing slowly again, perhaps in part due to complacency caused by the lower rate.  Every student in Uganda is affected either directly or indirectly by this disease.  Children sing heartbreaking songs about lost friends and relatives. Schools play a role in fighting AIDS by providing specific information to students that they might otherwise not receive. 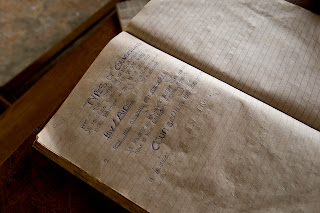 A student’s notebook at the Kyamulinga School.

Jane with one of the many placards used at schools.