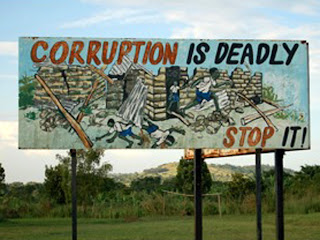 A billboard in Uganda.
Blog post by One School Director, Bay Roberts:
A 1996 study* (by the MIT-based Abdul Latif Jameel Poverty Action Lab) found that only 13% of funds allocated to Ugandan schools by the Ugandan government ever actually reached the schools. More than half the schools got nothing at all. Where did all that money go? Subtle inquiries suggest that most of it ended up in the pockets of district officials. When the results of this study were released in Uganda, there was moral outrage. Citizens exerted pressure on the Ministry of Finance to provide the national newspapers monthly information about how much money had been sent to districts for the schools. By 2001, when the study was repeated, it was found that schools were getting 80% of the discretionary money that they were entitled to. It appears that as long as it’s easy to embezzle funds, money gets stolen. When it gets harder to embezzle, the behavior is not as prevalent.
One School at a Time has experienced this sort of corruption first hand:
After we had worked with the Kukanga School for about a year, Jane Kibuuka, head teacher, finally mentioned to us that she had not received her full salary from the government for years! For no apparent reason, the government had been sending her about 50% less than was her promised monthly salary. Jane, at great personal expense, had visited the district education offices repeatedly to request back-payments. Each time, the official told her that nothing could be done and to come back later. In desperation, Jane finally provided a bribe of about $100 dollars to correct the problem. Unfortunately, this did not work either. Hussein Tadesse, One School Program Manager, took a trip last year to the district offices with Jane. Hussein was introduced but just kept silent while Jane expressed her concerns. Magically, that visit did the trick, and since then, the government has paid Jane back all her salary arrears.
The Ugandan government is well aware of the wonderful changes happening at Kukanga School and, all of a sudden, is incredibly cooperative. For example, one of the Kukanga teachers was a drunk. Jane had never been able to fire him because the government would not send a replacement teacher. This winter, all Jane needed to do was call the district education official and a wonderful replacement teacher was on the way within days. One School at a Time is providing the leverage Kukanga School needs to successfully negotiate with the Ugandan government to get their fair share of resources. This is just another way we work with Ugandan schools to help them on the road to sustainability.
*See Banerjee, Abhijit V. and Esther Duflo.  2011.  Poor Economics.  A Radical Rethinking of the Way to Fight Global Poverty.  PublicAffairs, New York.

← Having a Bad Day?
Patty Gilbert in Uganda →