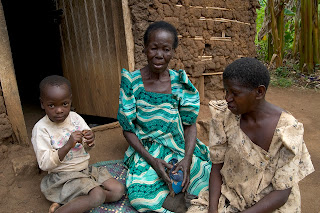 A mentally ill, but functional mother of twins (right) is
able to live with her family near the Kyamulinga School.

There was a disturbing story in the NYT Lens Blog this week about the plight of the mentally ill in Africa, documented by a photographer named Robin Hammond.  While covering the independence referendum in South Sudan, Robin visited a prison where he was shown a mentally ill man shackled to the floor, naked.  Robin felt that the only way he could justify photographing this voiceless man was to take up the cause of the mentally ill in Africa.  He has since photographed the plight of mentally ill people in several African countries, including Uganda, and is raising funds to continue his work in West Africa.

In Mr. Hammond’s words, from his emphas.is fundraising page:

“Wars, famines and natural disasters not only leave the dead to be buried but survivors to go on living. While many will have come through the crisis with their bodies intact, the same cannot always be said of their minds. In the last 50 years, sub-Saharan Africa has seen more of these crises than anywhere else in the world. Their legacy is mental illness on a grand scale with almost no resources to treat it.”

“Conflict and disaster diverts funds away from health and education. For the mentally ill, hospitals become prisons and ignorance results in stigma and neglect. Care often relies on the use of forcible restraints in both institutions and homes. The mentally ill are often accused of being possessed or branded as witches. Spiritual healers are regularly employed to ‘deliver’ them. They are often chained and sometimes starved so as not to feed the demon inside them. The mentally ill really are cursed, not by God but by the societies around them. I’ve spent my career documenting human rights issues but I’ve never come across a more neglected or vulnerable group than the mentally disabled in African countries that are in, or recovering from, crises.”

You can view other photographs and a video on Mr. Hammond’s website.