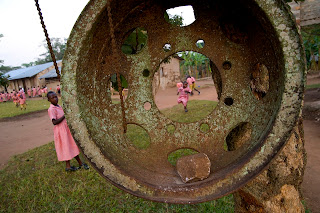 The school bell at Kyamulinga.
(Click for bigger image)
All over rural Uganda classes begin and end with the ringing of the school bell, just like here in the U.S.  The difference is that their bells are more innovative than ours.  At my daughter’s school, kids rush from the playground into class when they hear the electronically induced buzzing of a bell controlled from the school’s office by the teaching staff.  The kids throw a bunch of basketballs and soccer balls into a big metal bin on their way into the sprawling brick building to begin their day.  In rural Uganda, a designated child bell-ringer picks up a stone and beats on an old truck wheel hanging from a tree by a bicycle chain.  Kids in the midst of a sandlot soccer game leave their “ball” behind–usually a collection of plastic bags shaped into a sphere and bound with vines or twine.  Girls jumping rope (also often made with vines) stop their game and head into the stick and mud-walled classroom, where the learning begins.  Many of these kids thrive despite the lack of expensive facilities.  I remain convinced that if one could combine their ability to innovate with the resources that our kids have in the U.S., they would shine even more.
One School at a Time builds partnerships at schools like Kyamulinga and Kukanga to help kids move themselves forward while encouraging the strengths (like innovation) that they already have.