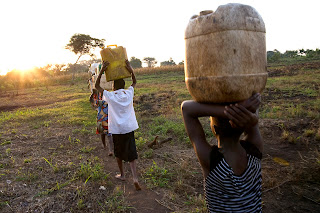 Young women carrying water near the Kyamulinga School.
Another post from Bay Roberts, One School at a Time Director, who  is traveling in Uganda.
Sometimes, when I am in Uganda working for One School at a Time, I stay as a guest in the homes of locals. Recently, I had such an opportunity. The family I stayed with had just managed to buy a home in the suburbs of Kampala. They have all the trappings of the American Dream- a home, a car, a garage, and a mortgage. The home has electricity and running water (although no one dares drink it- they boil it first and then chill it in the small fridge). The wife no longer has to bake cakes in a wood oven,  now that she has an electric stove–but she still does: the electricity is too expensive. They even have a toilet.
I was really happy about that because my knees are no good anymore- like many of us, it is hard for me to squat! I noticed after the first night, that no one seemed to be using the toilet – just me. I wondered about that and later found a full-scale latrine in the back yard. Turns out that the toilet is just for show and for the rare occasion of a  “mazungu” (white visitor).
The first morning, I was wondering to myself when if ever I could get some hot water for my tea. The women of the household had asked me repeatedly if I was going to bathe. Since I had had a very cold (no hot water) shower the night before, I had decided I was clean enough for the time being. Finally, the wife came to me and told me “Bay, you must go bathe. We will not serve you tea until you are clean!”
Later, she made sure to inform me that women and girls should bathe themselves two to three times a day.  Such cleanliness is an important part of the culture here, especially among women.  Bathing aside, meals are always begun with hand washing, frequently in a plastic basin using soap presented by one of the young girls of a household on her knees before the men.

← Report from Uganda: Jane and the 330 Layers
A Witch Doctor and a Broken Ankle →