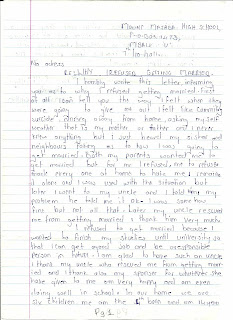 This image (click on images for larger version) is of the first page of a letter (transcribed at the bottom of this post) from Shamsha, one of Hussein Tadesse’s nieces.  Hussein manages One School at a Time’s programs in Uganda, and lives in Mbale, near the Uganda-Kenya border.  He is a passionate advocate for girl’s education in Uganda, and is the “uncle” that Shamsha refers to in the letter.  One School is proud of the work Hussein does for us and of his commitment to girl’s rights.

Here’s Hussein at a coffee shop in Kampala… 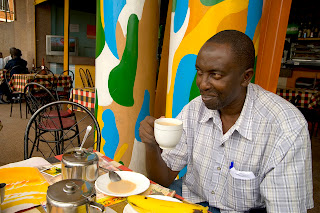 Back to Shamsha–she is a 13-year-old girl, daughter of one of Hussein’s brothers.  Her parents decided to marry her off in exchange for money.  Shamsha protested and was punished by her family, who took away all of her clothes except for the school uniform she was wearing.  The situation was unbearable for her, so she went to Hussein’s house, and he took her in.  Shamsha is now being sponsored by Patty Gilbert, a One School director.

Re:  WHY I REFUSED GETTING MARRIED

I humbly write this letter, informing you as to why I refused getting married.  First of all I can tell you the way I felt when they were going to give me out.  I felt like committing suicide, running away from home, asking myself weather that is my mother or father and I never knew anything but I just heard my sister and neighbours toking as to how I was going to get married.  Both my parents wanted me to get married but for me I refused, me to refuse made every one at home to hate me.  I remained alone and I was used with the situation but later I went to my uncle and I told him my problem he told me it OK.  I was somehow fine but not all that.  Later my uncle rescued me from getting married.  I thank him very much.
I refused to get married because I wanted to finish my studies until university so that I can get a good job and be a responsible person in future.  I am glad to have such an uncle.  I thank my uncle who rescued me from getting married and I thank also my sponsor for whatever she have given to me am very happy and am even doing well in school.  In our home we are six children.  Me am the 4th born and am 14 years old. We are Muslims where that they say a Muslim girl should be given out at 13 years as a culture where as I refused. I am happy with all of you people. Thanks for rescuing me from getting married.
Yours faithfully,
Shamsha Ibriahim

← Welcome to the One School at a Time Blog!
Changing Climate and Coffee →